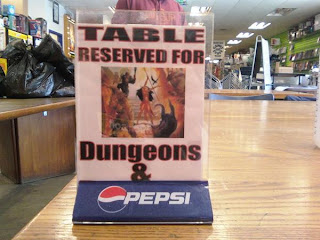 Session 2 of the Otherness campaign happened on Sunday and, I must say, it went swimmingly. We had only  three players to start with this time: Coffee and T.J. from last time, and my friend Larry, with whom I haven't gamed in far too long. In the last hour we were joined by another friend of mine, R.M. (no, I'm not trying to protect anyone's identities...), who brought along his 9 or 10 year-old son, Max. The players headed down Under Xylarthen's Tower (by the indefatigable Jeff Reints) and made a good run of it: everyone got out alive!

Under Xylarthen’s Tower is a great adventure, full of oldskoolisms, and they’ve only just scratched the surface. I’m really beginning to see how even a single mega-dungeon could become the focal point of a whole campaign.

I'm blushing as I write this: I almost forgot to hand out experience points for our last adventure. Now, maybe it's because I'm the DM, so I don't get XP, but more likely it's because it's been a long time since I played a game where killing things and taking their stuff was, well, the point. The thing your character (and thus the player) gets rewarded for.


Reward cycles are critical to rpg design; if they're done well, they make it perfectly clear what characters should be doing. The reward is really the secret engine that drives the game, and you know what? Gygax and Arneson nailed it. How much more clear could they be? And that was one of the problems as time went on: Someone(s) decided that characters should be rewarded for role playing instead of rolling to play, which the game's fundamental structure refutes. I mean, sure, you can change it, houserule it, whatever. But you should at least realize what you're doing. Understanding this earlier would have saved me YEARS of frustration. :0


Back to XP. I'm following the "100xp/hd" rule, evenly divided out amongst all surviving characters, with a small bit of adjustment for Bill's second character of the afternoon, who joined the party after their epic battle with the giant rats.

Plus: Any characters that have high enough Prime Requisites should add the appropriate percentage.

And don't forget: The small bits of treasure picked up here and there. I didn't keep track of that, but they all split it up immediately, so it's already on the character sheets.

Hm. Not much. The first thing that occurred to me was that it's actually a tactical decision to not take a huge party into the dungeon. Had only five characters gone down, assuming they all survived, their XP would've been effectively doubled.

Session 2 of my Otherness campaign will be happening on Sunday, February 22 from 12-4 at The Source Comics and Games. Looks like the Gaming Room's gonna be full o' punks, but I says we shall sonically whelm them! WHELM them, says I!
Possible endeavours:
Do you see a theme??
This is a Free Campaign, so all players are welcome. Those who show up determine what we'll play and which characters are subjected to horrible deaths.
Posted by kesher at 4:40 PM 6 comments:

Sorry it's been so long since I posted, but the Shadow of the Plague fell on House Kesher. Yea, it fell, but has passed on, may it not soon come again...
A few years ago I came to the realization that I was sick to death of character histories. Some of it stemmed from the cliche that, really, no back story I had ever created had really been used by any given GM. Although, if I'm being honest, I was usually the GM and, while I encouraged back stories, rarely did I do anything with them: Mea culpa too.
Some of it also came from years of playing indie games where mechanically-relevant back stories were created during play, sometimes by the player alone, sometimes with the help of the group (Polaris is a really good example of this, as is In a Wicked Age, mentioned a few posts ago); this all made the "Orcs killed my family" clunker seem less than useless.
So enter my first attempt to let go and roll up a character for ODD completely randomly, right down the line. My task was to create a character out of whatever the dice gave me. Here were the results:
Str: 10
Int: 12
Wis: 9
Dex: 11
Con: 6
Cha: 7
Hm. Not too inspiring. Years ago I would've whined about it. However, that wasn't an option here---whining to yourself is usually just silly...
So, I thought, he may as well be a Magic User, even though that Con score is going to mean a -1 to all HP rolls. Except I had a sudden flash: Oh no---even with the Con, he's going to be a Fighting Man. He constantly drinks wine to deal with a persistent hacking cough that has sapped his strength and soured his disposition. His alignment was obviously Neutral at best, sliding toward Chaotic. I bought him a scimitar for pure color, a quart of wine for character and who knows what else, decided he could speak both Gnollish and Elvish, named him Ballantine, and he was ready to go. I'd play this guy in a second. And you know what else? I would make Con rolls after every fight to see if he didn't double over in a coughing fit. And if he did, well, that'd start to shape the rest of his actions. There's no way I'd ever have come up with that had I rolled 6d6takingthebestthreeofeachrollandputtingthemwhereIwanted, or allocated points, or whatever.
Ballantine's patron god is Randomness.
I was so excited I rolled up another character on the spot:
Str: 14
Int: 9
Wis: 7
Dex: 10
Con: 13
Cha: 15
Okay. Better scores on the surface. So, as the rules allow, I knocked his Wis down to 4 and raised his Str up to 15. No mechanical effect, but it does get him the 10% bounus on XP earned if I make him a Fighting Man. Anyone with a Wis of 4 is obviously Lawful, and probably a dwarf. So, a Lawful Dwarven Fighting Man, almost foolishly devoted to some kind of cause, most likely (given his Cha) with a couple of devoted followers. I named him Redbeard, made sure he was wearing platemail, and would defintely load him down with first hirelings, then henchman, for him to awe and boss around. Not bad either!
And the thing is, these details aren't really "backgrounds", per se; they're more like hooks upon which to hang some quick and dirty characterization during play. Each of these characters, of the uber-generic classificaton "Fighting Man" are already starkly differentiated from one another, all through the simple, built-in game tool of Randomness. Oh, Randomness, how I used to loathe you.
And how I love you now.
Posted by kesher at 10:26 PM 9 comments: