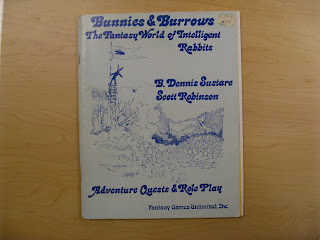 Boys and girls, here's your chance to own a piece of rpg history, and help out a good cause!
I've placed up for auction my copy of Bunnies & Burrows. All proceeds go to benefit the Gygax Family Memorial Fund, more of which can be read about here, and on the TARGA website.
Bid now: This is a 1st edition copy in close to pristine shape, including two, count 'em two copies of the two-sided goldenrod cardstock reference sheets. If you're curious, I have more images of the reference sheets, table of contents, etc. Just lemme know.
Why are you still here? Go bid!
Posted by kesher at 5:35 PM 3 comments: 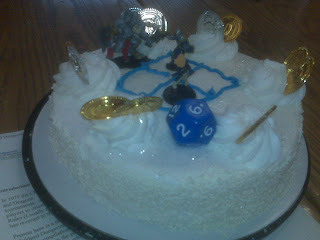 I think I'm done with the big, sprawling accounts of play. I only end up delaying writing the posts until it's long past when we played. So, I'm now all about abridgment. I'm going to try smaller, more frequent posts.
In the spirit of abridgment, Otherness 11 was played with a rediscovered D&D simulacrum: Abridged Dungeons and Dragons. I have no idea how I first stumbled upon these rules, but I do remember that it was back maybe eight years ago when I was first getting interested in the White Box. I was cleaning out my games and there it was, so, since I hadn't had time to flesh out Level 2 of GRISTLEHELM, it seemed like a good session to try something different.
I have to say, it actually worked pretty well. It was low seriousness, with a Wizard (named Anton the Gloomy, Friend of Bats), one Hero (Melvin's twin brother), a dwarf, two elves, a goblin and...wait for it...a Ghoul named Ghoulio. Yes.
I took them through a dungeon I made a few years ago, The Lost Tomb of Frater Perduabo, Mad Alcymyst. No characters died, and I didn't really notice any imbalance from the elves being able to turn invisible or the Wizard having access to a big list of spells, including an innate ability to throw a fireball.
It'd need some tweaking for the long haul, but what game worth playing doesn't, right?
In case you're wondering, Ghoulio was discovered locked in a room full of mutated bats. On the fly (and this is what's so great about the oldskool mindset), I decided that since ghouls can't parlyze elves and so probably don't even LIKE to eat dead elves, there wasn't really any animosity between the two. I had a momentary vision of the King of Ghouls and the Burning Year having a diplomatic meeting in an overgrown graveyard lost in the forest. And really, Ghoulio was played (by Shelly, new gamer to our group) more like a Lovecraft ghoul, meeping and creeping, complete with very ghoulish finger-twitching...
Oh, in case you're wondering, it was Will's bday last week, and the cake arrived mid-session courtesy of his wife, Susan (playing Carol the Elf...) And it was tasty.
Happy Birthday, Will!
Posted by kesher at 12:57 PM 3 comments: