Based on Jeff Reints' acceptance of Rob Conley's say-so, I've committed to answer RPG questions over at Stack Overflow. I think this is a great way to use the IntraBrain, and I'm hopeful it'll help broaden the interest in and connection to the Old School Renaissance.

However, they need more people to commit to the RPG topic before it can go live---sign up! Commit! Share your experience (or admit your ignorance!)
Posted by kesher at 11:02 AM No comments: 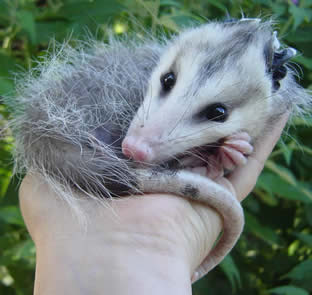 So, while playtesting the primordial_odd rules yesterday, my six year-old son, Max, began to get bored. Now, this isn't unusual, but while he initially said he wanted to know "when we're gonna fight something", he still wandered away even during combat.

At first I got irritated, mostly because I was trying to keep the playtest running as smoothly as possible after a delayed start of making/porting characters and other things, which didn't help. Luckily, however, the characters were exploring the Upper Caves of the Darkness Beneath from Fight On! 2, and that means eight-legged dungeon possums. I should also mention that Max was playing Rex, a large, three-headed talking dog he based off of an old miniature of mine.

Rex is the first to notice the possums, due to his sense of smell. When he bounds over to them, they understandably cower in fright. Max decides that Rex is going to try and talk to them "in animal language." Um, okay. Got nothing planned for that, but he's suddenly interested. After a bit it becomes obvious that Max would really like one of the possums to be his "minion" (yeah, we saw Despicable Me, which was actually pretty good...) Again, my initial reaction was "Ugh. No. Please no more stuff to keep track of!", but again, I thought, well, this is what he wants from the game, right now, as a player. So, again, okay. One of the possums, whom I name Bertram, wants to get out of this podunk cave and see "The Big Light in the Sky", of which his ancestors tell so many frightening tales, for himself. He jumps up on Rex's back, and away we go...

And that was it---Max was hooked for the rest of the adventure. He even talked about Bertram on the way home, and how since Rex and all his other characters (Mudskel, Fire Skull, Bloodarex and others) all lived together, Bertram would become friends with them, too, and so could always come along on adventures. This was for me a big reminder of paying attention to the players---as far as I'm concerned, most of my fun comes from paying attention to what they're grooving on at any given moment and making that thing manifest itself fulling in the game. Max's inattention made me pay attention; it let me know I wasn't doing my job.

Thanks, Bertram. I have no doubt you'll become an actual character some day---you know, when you finally learn to speak "human language"...
Posted by kesher at 1:35 PM 7 comments:

primordial_odd: A Work in Progress

Alright, here's the newest iteration of my attempt to write a simulacrum of the Fantasy Supplement from Chainmail:


There are still lots of holes, but I've made a couple of breakthroughs that I'm pretty excited about.

For the tables themselves, which still woefully lack any sort of instructions or examples, so here's a short crib:

I'm happy to field questions, and if someone's willing to give the combat tables a spin, well, that'd be fabulous. I'll be playtesting it this Sunday for Otherness: Session 13. Already sounds like we're going to have weird characters, so stay tuned...
Posted by kesher at 9:44 PM 3 comments: