You are standing in a field... 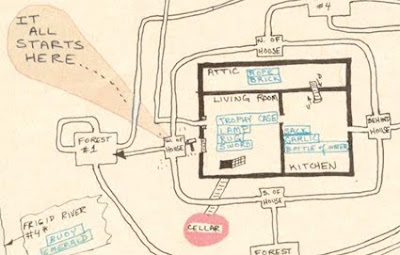 Otherness: Session 12 was held this last Sunday at the Fantasy Flight Games Event Center, which is a really great place to game. The staff was friendly and accommodating, and someone actually took a picture of Will's whitebox and LBBs, along with my copies of Greyhawk and Gods, Demigods, & Heroes---they claimed their friends wouldn't believe that someone was still playing with these rules. :) Carl was, unfortunately, working there, but he was at least able to catch some of what was going on.

So, I had a last minute inspiration and started the group out "standing in a field, west of a white house." Those of you as old as me may well remember those opening lines to Zork, the venerable text adventure game from Infocom. I think Will was the only one who picked up on it right away, but it was worth it. I didn't stick slavishly to all the details, but the main stuff was in there (D&Dized, of course) as noted on the map above. Once they opened the trap door in the living room, it led, not into the Great Underground Empire, but instead the somewhat less-whimsical Long Tombs.

I created the map for the Long Tombs using this random dungeon generator. AFAIC, it's the best out there. And, we decided to give up on mapping, so I just plunked it down on the table, showed them where they were, and they chose where they wanted to go. I noticed no angst.

As for characters, Will played Aldmore, 3rd lvl MU; Susan played Sydney, 1st lvl Fighting Girl (or Battle Maiden, as we started referring to her); Jesse, returning to game with us again after an absence, played Treehorn the 1st lvl MU; Trevor played his 2nd lvl MU Narpet, as well as running Ashley's cast-off FG (whose name is currently escaping me), and Max played a 2nd lvl three-headed dog named, of course, Rex.

Ladies and Gentlemen, we're back!

After several months without posting or playing, Otherness 12 will be happening this Sunday, June 27, from 10-2, at the (usefully local) Fantasy Flight Games Event Center.


I'm not yet sure what Adventure will be had, but play we will. After a few past sessions of mucking about with rules, we're sticking with mildly house-ruled ODD. I'm actually working on assembling a single URTEXT of the three little brown books and some sections from Greyhawk (mostly monsters, treasure and magic.) I'm doing this using the handy, free, surprisingly formatting-friendly PDFtoWord service.

As always, this is a Free Campaign, which means anyone can show up and play at any time. If you live in the area, come on out and join us!