Alex Fontinakes (aka monk) presents for your perusal issue three of his face-shredding hardcopy 'zine, Wizards Mutants Lazer Pistols. I only found out about this fine publication when I volunteered to do the above illustration for the current issue. Anyone who spells "lazer" with a Z is alright in my book...

While you're at it, check out his old school module Beneath the Ruins, the first in what I hope will be a long line of products from Geoffrey McKinney's newest venture, Psychedelic Fantasies.

Proof of the Existence of Glob!

Ask, and it shall eventually be given...  Alexandre Ilitchev at Blood Ghost has made my dreams come true with Adventure Time: The RPG!

The Good: It's freaking awesome.

The Bad: It's a full-color pdf, and so essentially unprintable on a home printer (well, my home printer anyway...) It also has no bookmarks.

The Controversial: It's based on 4e.

Now, that's probably only controversial to the Old Skool crowd I run with, most of whom have no real use for 4e. Actually, it'll probably be more disappointing than controversial. I myself have an on-again/off-again fascination with Type IV, especially in its Essentials manifestation, so it doesn't particularly bother me.

On the contrary, I think it's a sorely-lacking example of how flexible 4e can be. This game really strips the system down to its fundamentals, and shows (also for the first time) that 4e does humor with no problem. Frex, if you play a Candy Person (and of course you can), your racial power is "Candybalism", which allows you to break off and eat a piece of yourself in order to immediately use a healing surge. Completely. Algebraic.

There's also an online Character Generator, which allowed me to create Sweet Cheeks the Awesome, Sticky Bun Warrior of the Candy People, in all of two minutes.

Do yourself a favor and check it out. If you're not familiar with Adventure Time, well, stop living in a cave and join us in the Land of Ooo; you won't regret it. Well, at least not as long as you have a sense of humor...

You know what Time it is! 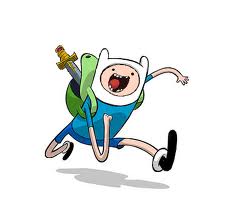