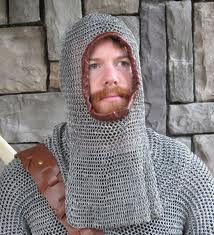 On the proverbial spur-of-the-moment, I've decided to run Chainmail as an RPG tonight on G+, from 10pm-midnight, CST. This will be "straight" Fantasy Supplement, with a few things added in from the main rules (arrow fire, morale, I think that's it...) Each Hero or Wizard gets 3HD of followers, human or otherwise (HD here meaning how many Men  they fight as)

(and no, that's not me in that picture...)
(and yes, it was very difficult not to use a picture of someone wearing a chainmail bikini...)

First of all, unrelated, this is awesome: The Friar A lot of weird images come up when you type the word "gestalt" into Google... Anyhow, this one fits what I'm talking about. I think.

The discussion going on around DnD Next or 5E or whatever has been nagging at me. I really like the idea that it sounds like they're actually going to pay attention to the history of the game and try to unite all editions in play, so a 1Eish character could adventure right alongside a 4Eish character. Fabulous. I signed up to playtest, and will do so in good faith. However, I've been wondering if it really needs to be so involved. This came to me yesterday when rereading some forum and blog posts about how M.A.R. Barker of Tekumel fame used to run his games. Players would have some details for their characters, and then when conflict arose, they'd simply roll a d20, and Prof. Barker would let them know what happened. The whole mechanic was the higher you rolled, the closer you came getting your way. This was modified by the context. You can't really get simpler than this.

So, based on that thinking, here's a little unifying (as yet untried) system to bring all versions of DnD (and since I've been reading Hackmaster 4e lately, that too!) into the same game.

GESTALT
Unbelievably, this word is not an acronym. I'm using it with two assumptions in mind:

Character Creation/Importation
Conflict
I think that's about it.

So yeah, Will, if you're reading this, this is what we're gonna play.

Oh, and here's the other image I almost used: 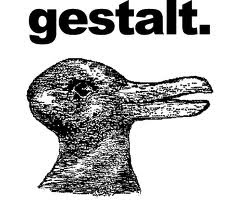 It might actually represent the core of the idea better:

"Is it a rabbit? Is it a duck? Who the hell cares---it's one weird looking creature and it wants our BRAINS!"
Posted by kesher at 4:43 PM No comments: 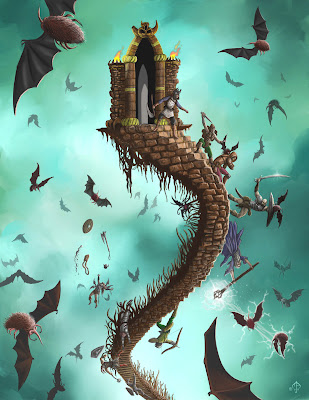 Go here for more info, but the skinny is this:

The massive, classic Fight On! hardback compilations are almost ready to go back into the archives. Get 'em while you can with these particular covers!

Use this lulu code through the end of this month for 20% off your order: SWEET305

Last but not least, you can get free pdfs! Not to be missed!

Roll the Bones Fantasy Fiction collection (I've got a story in here...)

I think all the other issues might be on sale, too...