I submitted an illustration to this contest right under the wire of the deadline and, lo and behold, I placed in the Honorable Mention category! I cannot possibly communicate how thrilled I am by this!
The announcement itself can be found here. My entry is 6th from the top. And, like you'll be able to stop yourself, but be sure to peruse all the other entries---it's simply astounding how much great artwork is being cranked out around the Old School Renaissance.
Thank you, Calithena and Fight On!, for this opportunity.
Thank you, Erol, for a body of work that made me believe in the reality of fantasy.
Posted by kesher at 1:55 PM 3 comments: 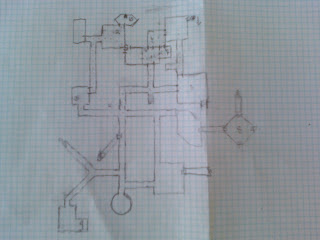 This is the players' map so far for Under Xylarthen's Tower, Level One. With no immediately obvious other routes, at the end of the session it was decided that next time, they'd be heading downwards...but I'm getting ahead of myself. One cool thing about this map is that they've numbered all the rooms and, in a key (outside the picture), identified them by what they felt it was important to remember about each one. Awesome.
We had the largest party since the first session: Eight characters, two hirelings, and two charmed berserkers. Steve was a brand-new player, and R.M. brought along not only his son Max again, but his daugher Ruby. Steve made a Fighting Man named Mardias, Max brought an elf named Redwood, who functioned this Adventure as a Fighting Man, and Ruby brought a Magic User named Rose Petal. R.M. brought a Cleric named Kohenim (that's an in-joke for all you fellow Jews reading this...) The usual suspects rounded things off, with Will playing Melvin, Larry playing Nimfitz Niraxis (now 2nd level!), Trevor playing Narpet, and Sean playing Gorlim.
We also tried out my newly-minted Judge's Guidelines. I'll post my thoughts about this seperately, but the short version is: Meh. I couldn't keep track of the plusses and minuses people were getting, and it actually seemed to slow down combat, with one notable exception: When someone (I'm forgetting who at the moment) killed a white ape with a single arrow shot! I think I'll keep using the general  conflict resolution section, but otherwise we're going back to normal next time. In some ways I think I just needed to get it out of my system...
Some Highlights:
We also used miniatures for the first time. I had a bunch, bought the last time we played, still unpainted, and Will brought his painted version of the same set. I had forgotten how  aesthetically pleasing it is to use painted miniatures. I need to get to work on my own! They were, of course, helpful for clarifying the one combat we had.
Overall, this session felt a bit like the calm before the storm of heading down to lower levels. I'm excited to see which descent they choose. It also reminded me that running a game with eight people is a lot more challenging than playing with just three or four...
Posted by kesher at 1:41 PM 2 comments:

Otherness: Session 5 will take place this Sunday, May 17th, at The Source Comics and Games, from 12-4. This is a Free Campaign, so anyone can show up and play at any point, though if you feel certain you'll be there, I'd love to know ahead of time.
Having canvassed, perhaps, all of Level One, I imagine we'll be heading (deeper) Under Xylarthen's Tower. There are still many wights, and probably an army of zombies lead by Chaotic zealots. Anyone want to play a cleric?
Posted by kesher at 10:29 PM 2 comments: