It's so freaking impossible to keep up with the flood of goodness being produced these days, but here are a few I've had my eye on: 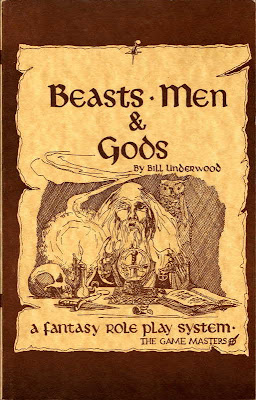 This venerable game had approximately 1,000 copies in print. My friends and I, back in maybe '83 or '84 somehow got ahold of a copy and played the crap out of it. I think, at the time, we really loved the piecemeal armor system and the more detailed combat (well, more detailed than AD&D.) It's recently been reprinted by the author in the first, at least as far as I know, successful petitioning of an original author by a fan--the Vault Keeper. This enthusiastic Italian has actually been digging up a bunch of interesting lost RPGs; it's definitely worth your time to poke around through his blog.

You can by your own, brand-new, almost facsimile, copy of a piece of RPG history here:

There's a sizable (60 pg.) pdf preview, so you can get a pretty good sense of what it's like. I would like to point out here that, not only do I have a vintage copy, it's signed by the author. :)

Oh, and there's also a strange Russian novel by the same name... 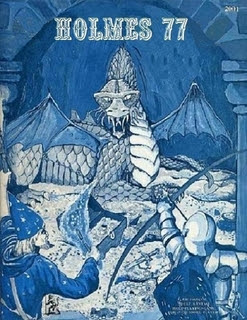 The excellent Professor Thork has put together a "retro-edition" of the original Holmes Blue Book rules for Basic D&D. There have been a number of expansions for these rules floating around for a few years now, but Holmes 77 puts it all together in one document, altering as little as possible. Now you can get your Holmes on from levels 1-9 and beyond!

On a related Holmsian note, the industrious Zenopus has put together and is rapidly updating a Holmes Basic website. Go there now.

John Slater, from deep within The Land of Nod has produced, as far as I know, the first OSR superhero game. Grounded solidly in class and level D&D, it is a fascinating, incredibly inventive game. One of the cooler features is that the GM picks a starting Experience level for the campaign. All characters then start with that fund of XPs to "buy" superpowers. Any left over end up being added to actual XP, so a character with just a couple of powers can easily end up starting higher than first level. This is so simple and elegant a solution to both how to do superpowers within this particular framework of rules and how to give players an option to start higher than first level. The trade-off choice is beautiful.

Oh, and did I mention it's FREE?

And, since it's made by John, the art and layout are superb. I will make time at some point to play this game!
Posted by kesher at 12:54 PM