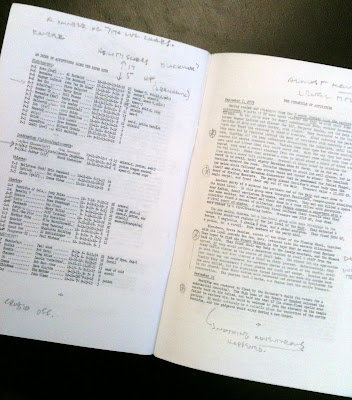 And so it begins--my most ambitious blogging project to date. I've recently been blown away by The Ryth Chronicle document that recently surfaced. It's an amazing source of insight into the earliest days of the hobby, and it really deserves a thorough discussion. My plan is to go through it cover-to-cover, usually covering a few pages at a time. I'll be posting images from the document that connect to the main point of the given post--the document is, of course, approaching 40 years old, and is, I believe, a scan of a photocopy, so don't expect sterling resolution. If anyone can offer insight about how to clean up the jpegs I'm snapshotting out of Reader and editing with Photogallery, I'd appreciate it! 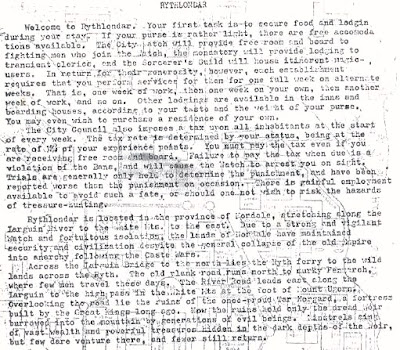 We'll start out with the introduction, right on the front page. This is a thing of beautiful utility--it sets up the whole framework for play in four short paragraphs, including all those things that many DMs (well, okay, me anyway) hand-wave:

"Overlooking the road lie the ruins of the once-proud Tar Morgard, a fortress built by the Great Kings long ago. Now the ruins hold only the dread Weir burrowed into the mountain by generations of evil beings. Minstrels sing of vast wealth and powerful treasure hidden in the dark depths of the Weir, but few dare venture there, and fewer still return."


Alright. I know exactly how to set up my Adventurer, and where to go from there. Plus there's an echo of the famous "...vast, ruined pile" quote from the LBB. Oh, and has been pointed out elsewhere, it's called a "Dragons and Dungeons Campaign". :)

Houserules
Next, logically, come the houserules for this particular campaign. The most fascinating thing to me is the Combat Hit Matrix: 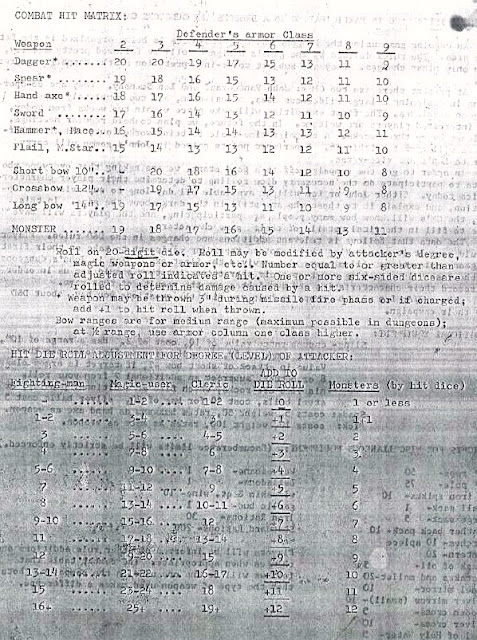 It's a bit hard to read, but it first adjusts AC targets by weapon used. I don't think these guys had Chainmail, nor do I think (given the details of the first character report on the next page, and the fact that the Hit Die Roll Adjustment doesn't include thieves) that they had Greyhawk. It's a fairly logical extension of the combat system, especially if you know anything at all about how weapons and armor actually work, but I'm curious where it came from .

Next is the really interesting part, the "Hit Die Roll Adjustment for Degree (Level) of Attacker". It appears they immediately de-matrixed the combat matrix into a simple hit bonus dependent on level. Sound familiar? So much for the innovations of the d20 system! (okay, that's an oversimplification, but still...) They tinkered a bit by letting everyone increase in smaller increments over levels (as opposed to the combat table which only grants bonuses every three/four/five levels), but that's a pretty common houserule even these days. I'd use this table as it stands.

Current Questions for John and Len
If anyone else has questions, just add them to the comments.
Posted by kesher at 12:58 PM