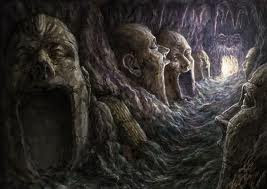 Wayne Rossi, over at Semper Initiativus Unum has published his own modest 'zine, Dungeon Crawl. I laid down my $2.50, and promptly received said 'zine. This is something that seems like it might be a burgeoning phenomenon: content that could easily have been provided as a download (free or otherwise) being printed and mailed. I'll admit, I was strangely pleased to get this in the mail, in an envelope. Here it is: 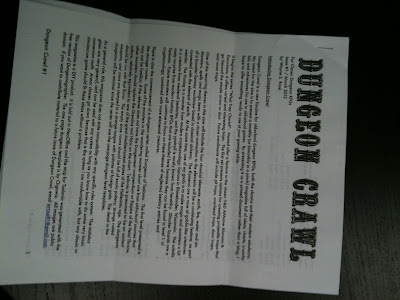 I like the intro 'cause I'm always interested to hear about the process. Some might be slightly annoyed that an entire sixth of the document was devoted to an intro, but I'm not one of them. The traps are fairly generic, except for the death ray results, which were pretty awesome. Six magic items, each with an elemental focus, as per the intro, all of which I could see myself using. The five monsters are quirky, one of which (the Ypotryll) I'm immediately going to use as a riding beast in my campaign. I coulda done without the Shocker Lizards. Five new Magic User spells, four of which were 1st level, one of which was 4th level. I don't usually use spells from outside sources (I'm not sure why that is), but it'd be fun for characters to find the aftermath of a Sand Storm spell clogging a room in the dungeon...

Last but not least, the first level of an apparently ongoing Dungeons of Tsalonia. This is presented in the One Page Dungeon Template, of which I'm a big fan. This of course means that descriptions, etc., are left to be fleshed out by the individual DM, which some might dislike.


This is very much an oldschool dungeon, in that there's no attempt at Gygaxian Naturalism. Insert into campaign map, and away you go. :)

On another tack entirely, check out this excellent bunch of free paper minis, with basing instructions. Just click on the pictures themselves to download your legions. I can relate to this line:

So, if you prefer wargaming to painting models, and if you want to finish projects and play before hell freezes, paper can be a solution for you.